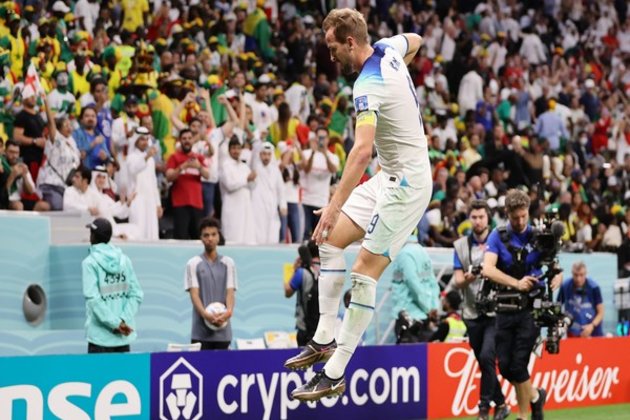 Al Khor [Qatar], December 5 (ANI): England dominated the first half to take a two-goal lead against Senegal through Harry Kane and Jordan Henderson at the end of the first half in the round of 16 clash at the Al-Bayt Stadium on Sunday.

Henderson and Kane's goals have England comfortably ahead. Senegal, who had been gaining ground in the match-up until that opening goal, had been cut open before the end. The African nation had a long way to go to get back from here.

The game began with England controlling the ball through their midfielders, enjoying initial possession of the ball.

There was an early opportunity for Boulaye Dia, who was through, but Stones and Harry Maguire averted danger to pass the ball to the goalkeeper.

Senegal were in a spot of bother as Abdou Diallo was closed down by Saka, but the defender held firm and Mendy arrived to retrieve the ball.

Jude Bellingham was a live wire on the field for England as he showcased brilliant skills. He became the second teenager to start in a World Cup knockout match for England, after Michael Owen (18 years 198 days) against Argentina in 1998.

Henderson found the back of the net in the 38th minute as England scored against the flow of the game. Henderson made a run from midfield unnoticed and side-footed past the diving Mendy after Harry Kane dives deep and dragged defenders toward him, giving him a superb pass.

Ismaila Sarr had the opportunity to find the equalizer for Senegal but couldn't turn it in.

In an ideal counterattacking goal, Bellingham snatched the ball deep within his own half, moved it around a bit, and then passed it to Foden on the left. Kane accepted it from Foden, moves to the right, and a few touches later rifles it past Mendy to give England a two-goal lead.

The half-ended with England leading Senegal 2-0, looking favourites to sail through to the quarterfinals. (ANI)