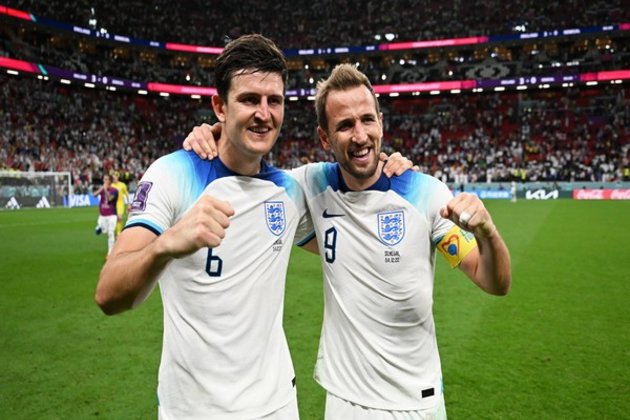 Al Khor [Qatar], December 5 (ANI): England breezed past Senegal with a 3-0 victory in the round of 16 encounter at the Al-Bayt Stadium on Sunday to set up a tempting World Cup quarterfinal matchup with the reigning champions France.

Senegal had looked well capable of fighting England, but Jordan Henderson and captain Harry Kane scored shortly before halftime to give England a 2-0 lead. Bukayo Saka scored the third goal in the second half to seal the game for England.

Senegal striker Boulaye Dia, looked threatening on the break after England's defence negligently gave the ball away just beyond the half-hour mark and came closest for the African team when he brought out a sharp one-handed stop from Jordan Pickford.

In the 38th minute, Henderson calmed England's fears by stroking the ball in after Jude Bellingham had played him in at the end of a beautiful passing sequence.

In the first half's final shot, Kane fired a fierce shot past goalkeeper Edouard Mendy, moving him one goal behind Wayne Rooney's tally of 53 goals for England.

With the final kick of the first half, Kane sent a fierce shot past Edouard Mendy, moving him one goal behind Wayne Rooney's record of 53 goals for England.

At halftime, Senegal's manager Rigobert Song made a few substitutions, but it had little impact as England went up three in the 57th minute thanks to Bukayo Saka's exquisite touch on Phil Foden's cross through the six-yard box over Mendy's outstretched arms.

With Saka's goal, England has now scored 12 goals in Qatar, equaling the nation's World Cup record set when they advanced to the semifinals in Russia. The Three Lions finished the game easily.

Earlier, England dominated the first half to take a two-goal lead against Senegal through Harry Kane and Jordan Henderson at the end of the first half in the round of 16 clash at the Al-Bayt Stadium on Sunday.

Henderson and Kane's goals have England comfortably ahead. Senegal, who had been gaining ground in the match-up until that opening goal, had been cut open before the end. The African nation had a long way to go to get back from here.

The quarterfinal clash on December 11 will be a mouthwatering matchup between Gareth Southgate's team and France, who defeated Poland 3-1 earlier in the day. It will be the first-ever knockout stage meeting between the two European heavyweights at a World Cup. (ANI)