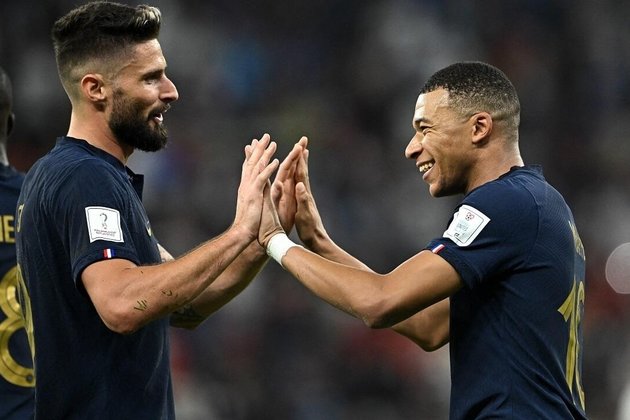 Enjoy for the moment

Olivier Giroud became France's record goalscorer during the 3-1 demolition of Poland. Just before half-time, he notched up his 52nd goal for his country on his 117th appearance. It was a cultured finish to pass Thierry Henry's mark of 51 and was set up by Kylian Mbappe - the man most likely to outdo his feats for France. And that could be relatively soon the way the 23-year-old is processing the space-time continuum. Mbappe scored two spectacular goals to take his tally up to 33 in 63 matches for France and five in this World Cup.

Already the next big thing

Poland coach Czeslaw Michniewicz was munificent in defeat. "No coach knows a recipe to stop Mbappe in the form he's in right now," he conceded after the masterclass. He then added that Mbappe would the one to take over the mantle of top striker from the likes of Cristiano Ronaldo, Lionel Messi and Poland's own Robert Lewandowski. He's not even waiting till they're gone. When we hear paens like that, we're immediately drawn to certain songs like Spandau Ballet's Chant No.1. The pressure is on. And Mbappe appears to be thriving.

England skipper Harry Kane won the golden boot in Russia for his six goals during England's surge to the semi-final. His barren streak hadn't really mattered in Qatar because other people were scoring for England. But, you know what it's like for strikers. Goals are like meat and - since we're in Qatar - soft drink to them. Anyway, crisis over. The Tottenham Hotspur forward thumped in England's second goal to give them control in their last-16 match against Senegal. They eventually cruised to a 3-0 win over the African champions to set up a last eight clash with the defending champions France. Kane boasts 52 goals for England in 79 internationals and needs one more to draw level with Wayne Rooney's high of 53. Go on Harry, make it the winner against the French.

Un crunch for the ages

Games between England and France in rugby union's annual European championships are labelled "le crunch". Pourquoi? Why not? And they're often feisty affairs. The hinterland? Mainly differing playing philosophies and military battles between the countries which still, apparently, have resonance for many people. Zut alors. Competitive football matches between France and England in the World Cup have been rare - 1966 and 1982 to be precise. But we will get one on Day 21 at the Al Bayt Stadium. "These are the games we want to play in," said England midfielder Declan Rice. "England v France ... World Cup quarter-final it doesn't get bigger than that. There's no point buzzing about beating Senegal if we can't push on and beat France."

Gainde - the review was informed - means lion in wolof, one of the Senegal's languages. So a national team supporters' club named "Le Douzième Gainde" seems self-explanatory. A pride of Le Douzieme Gainde were in good voice around the precincts of the Al Bayt Stadium before Aliou Cisse's Senegal took on England in the last-16 match. After the 3-0 drubbing there wasn't so much roaring. "It's been a good competition," said Aziz Kame. "We have to keep the coach. He has taken us to two Cup of Nations finals and we've won one of them. We've got to the last-16 of the World Cup. He's done a good job and he's African." Pride indeed.