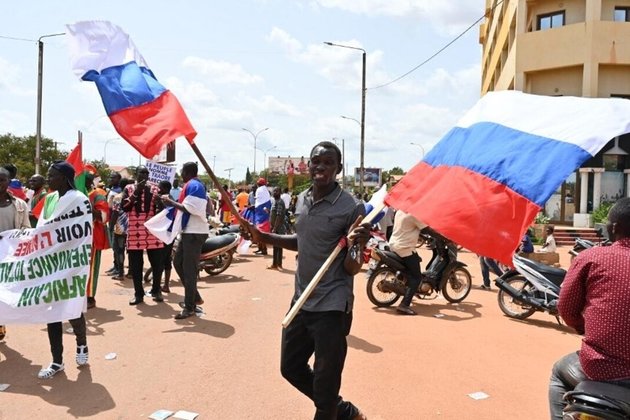 Protesters in Burkina Faso call for France's ambassador to leave

Demonstrators in Burkina Faso's capital on Friday demanded France's ambassador leave the country and called for the closure of a French military base, according to an AFP journalist at the scene.

Carrying placards with slogans such as "French army, get out", several hundred people gathered in a central Ouagadougou square.

Since 2015, Burkina Faso has been grappling with a jihadist insurgency that has killed thousands and displaced around two million people.

France has 400 special forces stationed in junta-ruled Burkina to battle the insurgency -- but relations have deteriorated in recent months.

France fears a repeat in Burkina of its disastrous falling-out with Mali.

French troops withdrew from Mali last year, after a 2020 coup in the former French colony saw its rulers inch closer to Russia.

Burkina Faso, also once under French rule, saw officers seize power in September in the second coup in eight months.

Rekindling ties with Russia has been on the agenda in Burkina since the coup.

Mohamed Sinon, one of the main leaders of the collective that called the demonstration, said it was to show support for the junta leader Captain Ibrahim Traore and the security forces fighting jihadists.

"We are a pan-African movement and we want cooperation between Burkina Faso and Russia, but also the strengthening of friendship and of cooperation with Guinea and Mali," he added.

Huge posters showing the presidents of Mali and Guinea -- both of whom came to power in coups, like Traore -- as well as Russian President Vladimir Putin were also carried by protesters.

In October, anti-French demonstrators gathered outside France's embassy in Ouagadougou and the French cultural centre was attacked.

Another demonstration outside the embassy followed the next month.

In early January, the French foreign ministry said it had received a letter from the junta asking for ambassador Luc Hallade to be replaced after he ruffled feathers with reports on the country's worsening security situation.

The tensions were such that Paris dispatched deputy foreign minister Chrysoula Zacharopoulou to meet Burkina's president.

"I didn't come here to influence any choice or decision. No-one can dictate Burkina's choices," she said after meeting Traore.

Meanwhile, in a separate development, security sources reported on Friday that a group of 62 women and four babies abducted by suspected jihadists last week in northern Burkina Faso, were rescued.

The news came just hours after security sources said a series of attacks on Thursday had left around 30 people dead.

The abduction of the women and babies last week prompted alarm from the United Nations, while the country's military junta warned of a rise in jihadist attacks on civilians.

The women and babies were abducted last week on Thursday and Friday near Arbinda, in the northern Sahel region, as they foraged for food outside their village.

Security sources said they were found in the Tougouri region, 200 kilometres further south.

Parts of Burkina Faso, including the Sahel region, have for months been under a blockade by jihadist groups in the region, making it increasingly difficult to supply the communities there.